The Magazine that started my passion with Citadel Miniatures

This is the first White Dwarf in my collection that I bought.  I'm missing only about a dozen issues of the complete run.  The early WD were truly worth the money.  They had articles that interested me, and the advertising allowed me to see what else was out there in the world. 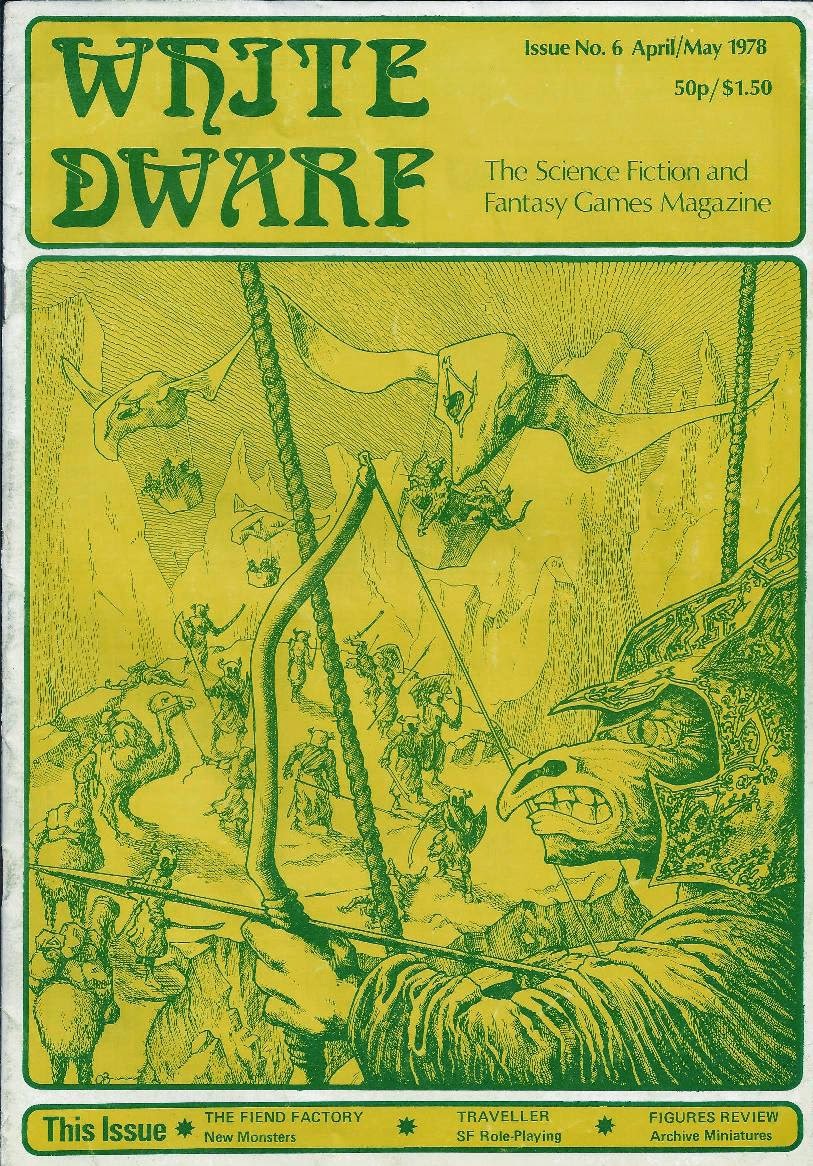 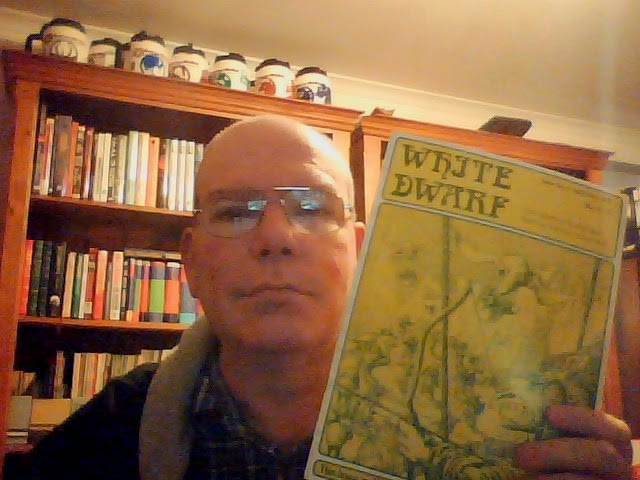 Posted by John McDonnell at 6:57 PM No comments:

The Zombie Pirates of the Vampire Coast

Back in June of 2005 in White Dwarf Issue 306 there was an army list under the Warhammer Chronicles banner that caught my eye.

Undead have always been a particular favourite of mine when it comes to armies in any system.  When I saw these and the buzz that went with them I just had to try making them.  There was a tournament later in that year, it might have been Orktober Fest, I can't remember but I was allowed to take them.  Normally the WFB people don't like lists from the WD, but my proven track record in defeats meant that I was in no way going to upset people by using a list no one else was allowed to use.

So here is my army!  I'm still trying to find the list I actually made for the tourney and will post in due course (I never throw anything away).

Wizza looked down, never up in the case of Leetle Jeem who after all was a Snotling.  Leetle Jeem was smiling with an evil intent that might have, on a bad day, worried Wizza, but today was not that day.

“Wot is day  Leetle Jeem?”  inquired Wizza, as he reached for his staff.

Great thought Wizza, while he could tolerate his green skinned kin, half-orcs were a different kettle of fish.  Depending on the trait which was dominate they were either trouble or more trouble.  Better known as mercenaries they were despised by all sides desperate enough to employ them.  Most employers treated them as arrow fodder and made sure they were always in front of them, and never behind.

Wizza followed Leetle Jeem to the outskirts of the camp and saw the massed ranks and banners of an army.  Wizza gave Leetle Jeem a good kick to arse, sending him sailing forward through the air to land at the feet of the Half-Orc “general”.  Bleeding little bugger thought Wizza, I should have known he was up to something with that evil grin he flashed me.

“Who’z da boss here?” said Wizza, ignoring the obvious candidate who was standing out in front of the massed troops.  He saw all sorts of banners and icons, lots of white hands and red eyes.  Oh dear he thought, not the exiles from I’s En Guard Eah.

The Half-Orc grinned an evil grin and pointed his thumbs into his chest.

“I am little Goblin, I am Lurt’ze commander of this here horde.  We are looking for employment and loot.  What do you say little Goblin?” said Lurt’ze.  His words were clear and not accented.  Wizza saw that this lot had spent a lot of time in human lands.  This could be a bonus.

“Da Boss Grog Tooftayka will see you Lurt’ze.  Follow me.”

What does this mean for the future of the warband?  Stay tuned for more....

The above force is everything except the Half-Orc Shaman who is currently on the paint table.  That's right all 0-100 Warriors, 0-20 Bushwackers and 0-20 Henchman,  Now I just have to build an Orc & Goblin army big enough to field them!

Posted by John McDonnell at 2:39 PM No comments:

I found these the other day while doing another futile search for something I thought I had, but in the end either don't have, or is was a figment of my imagination.  Probably the latter!

The vessels I painted are the original paint jobs from back when the game first arrived on the market.  I think I may send the Dark Elves back to the stripping yard and try again, my style of painting is better these days, well certainly my pallet has.

These models are the starter fleets that GW offered in the early days. 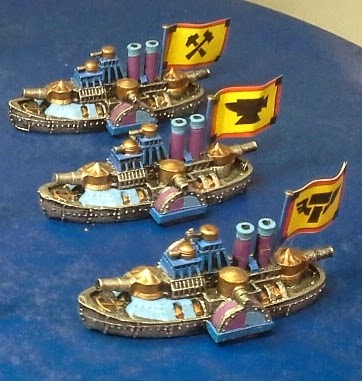 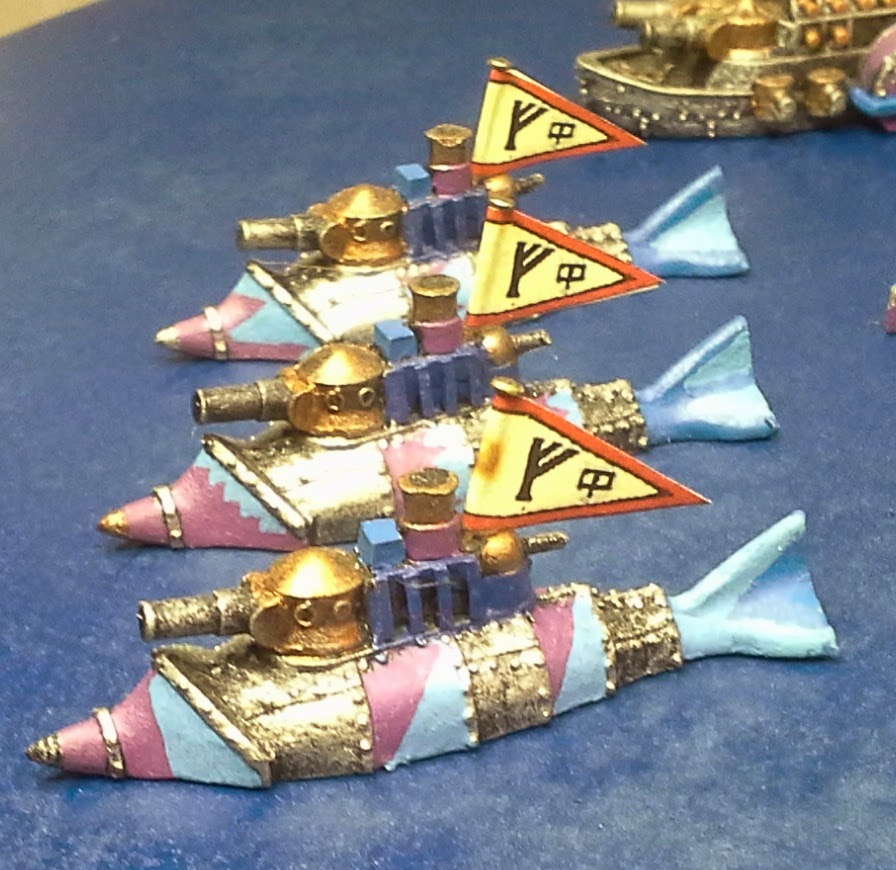 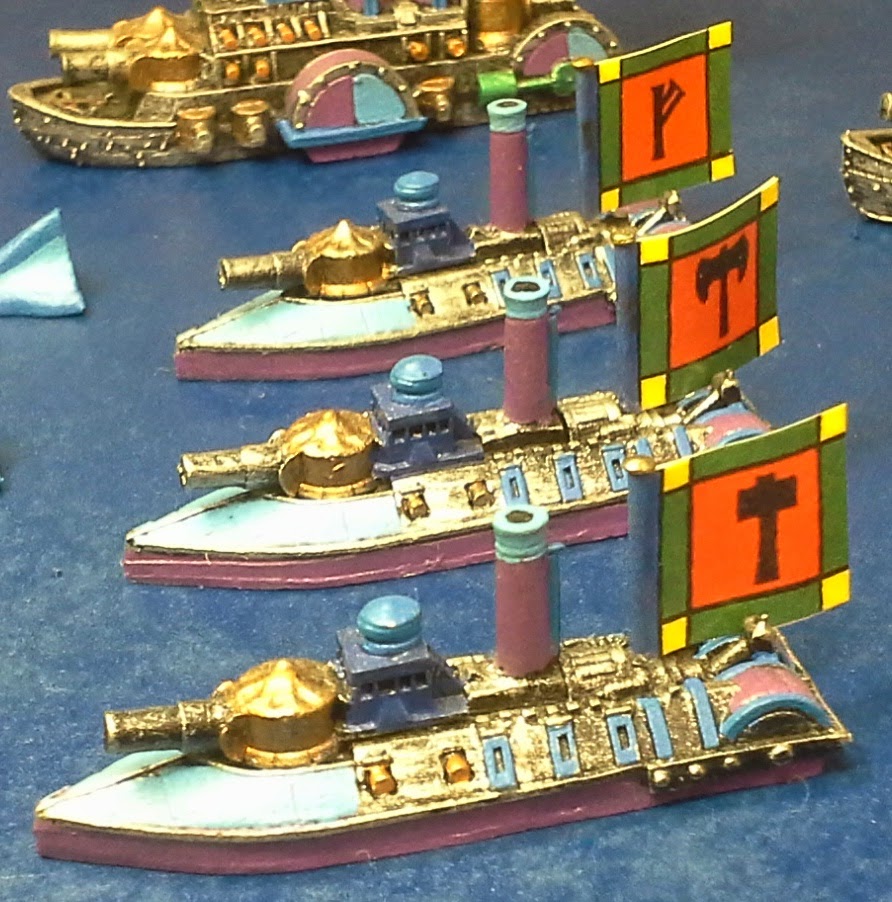 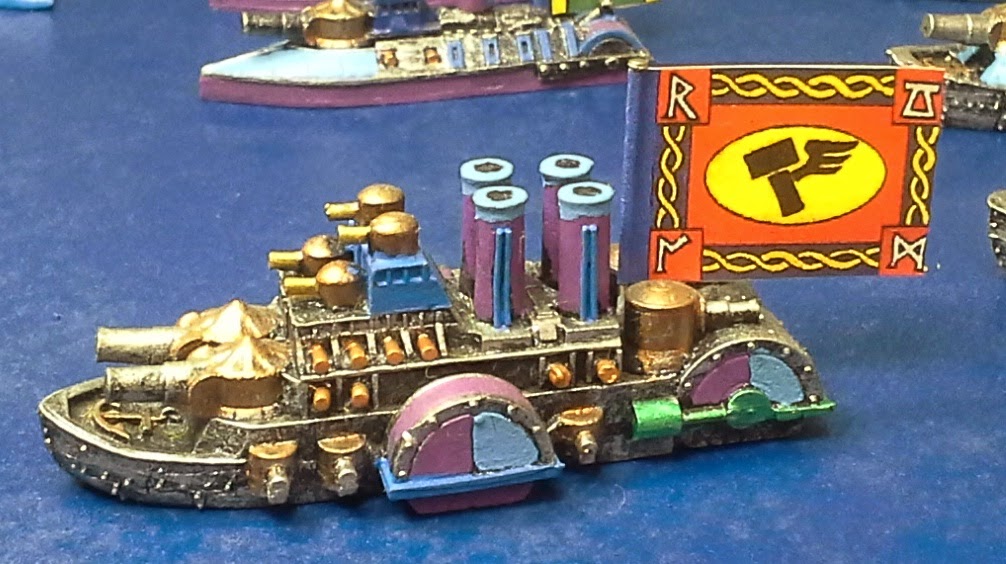 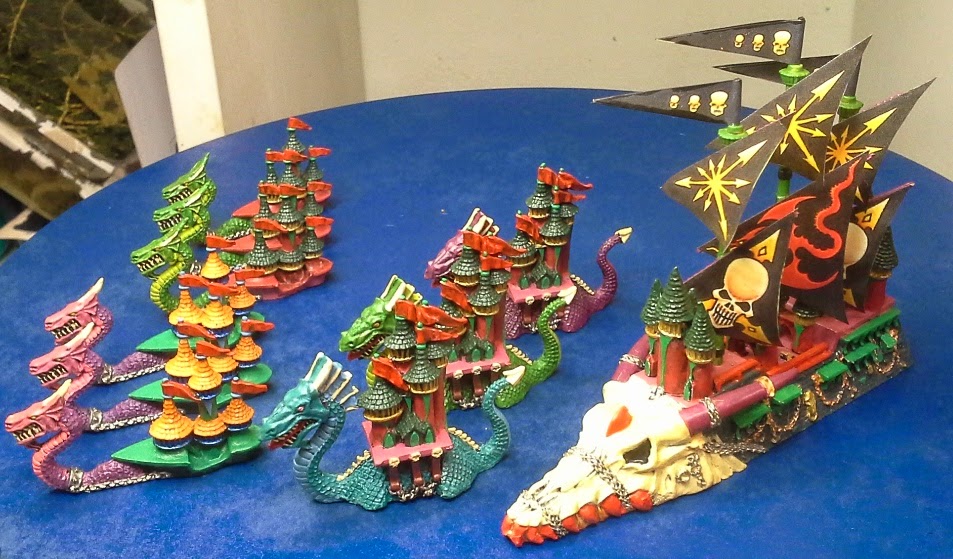 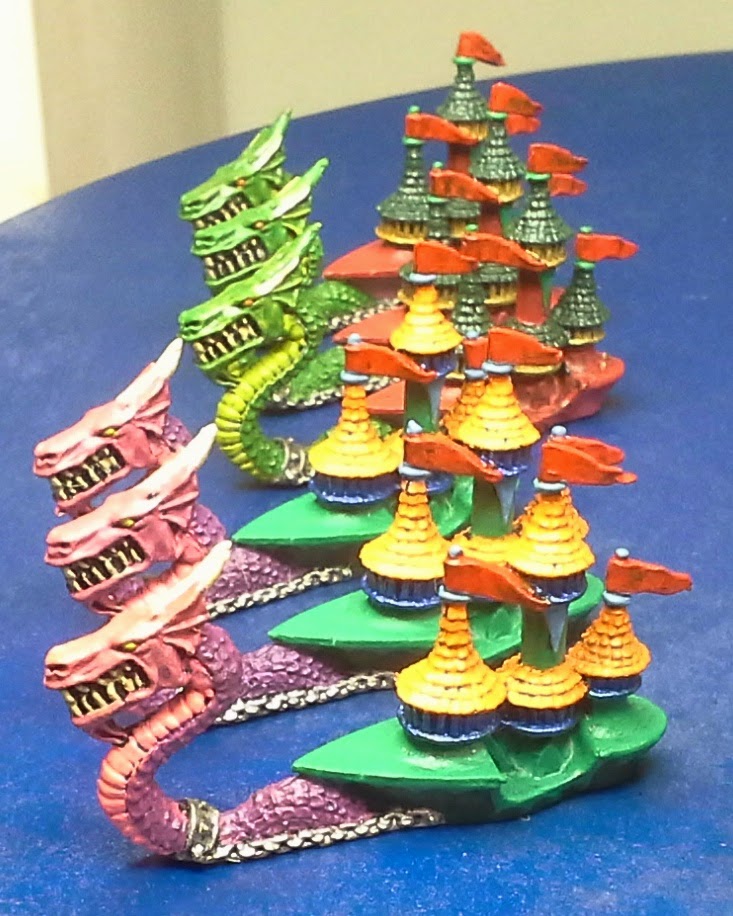 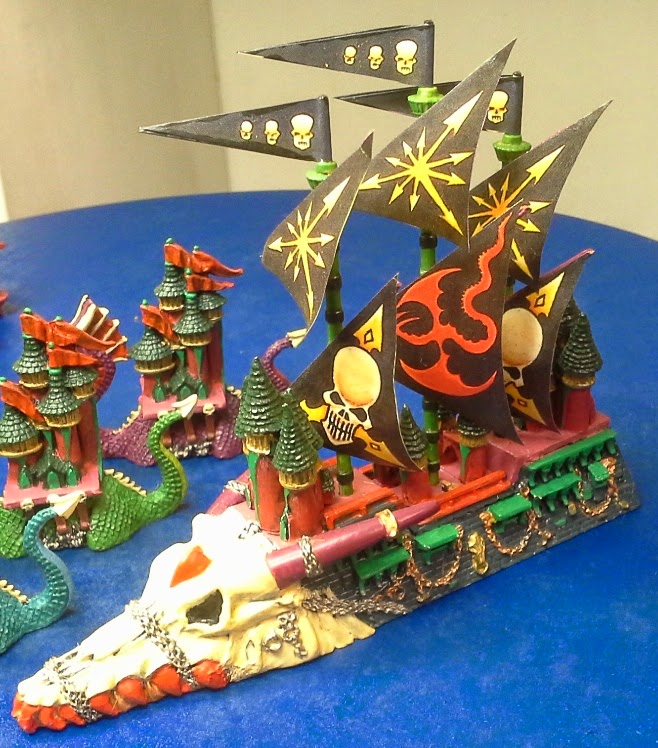 Evolution of the Slann Mage

Here is my collection of Slann Mages over the ages.  At the bottom there will a small Slann on foot, who I can't identify (OK I'm too lazy to go through my old WD's & catalogs!), if you can let me know?  Is he a mage or priest, I seem to dimly remember he may have been a mage.

The Great Escape or To Kill a Foreman

Within this illuminated post you will find a Warhammer Fantasy Battles 3rd Edition Scenario.  It has been tested a few times with an equal win/loss ratio for each side (though the Goblins are one up at present).  I'd love to hear from anyone who has played the scenario and would appreciate any constructive criticism.

Foreman the Snotling urged his brave and expendable brothers to greater efforts.  The bosses were on their way back to camp to prevent them from escaping.  Foreman dreamed of the wind in his ... well not hair obviously ... perhaps his teeth, with the occasional insect as a light snack.  Now if only he had time, but it was not to be.  On the horizon he could see the advance party of Goblin Wolfriders making their way ahead to scout the scene.

“To arms bruvvas, the rest of yu’z back to finishing da wagon!” 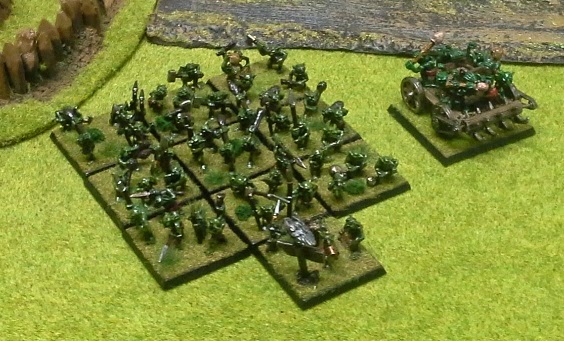 The Snotling army consists of 10 bases of Snotlings.  For those who want to know points they are 25 points each with an additional 5 points for Spore Weapons.  So a 300 point “army”.

Deployment:
The Snotling can only be deployed in the camp area, as defined by the terrain piece.

The Snotling bases allocated to building do not have to be moved; just place a marker next to them to reflect they are busy building.

Each Snotling base that builds rolls D6-4.  The number is the build points generated, either a 1 or 2, otherwise any other result (a negative) means the Snotlings are wasting time hunting for grubs or watching butterflies!

The Pump Wagon is being secretly built in one of three tents.  At the beginning of the game the Snotling player notes down on a piece of paper and keeps it hidden until it is needed to be revealed.  An envelope can be used, or a chit marker, anything that can be used to ascertain the truthful hiding place of the wagon.

Fire!!!
The Orc and Goblin camp is an extreme fire hazard, the oils and other materials used in making the tents are combustible.  Each tent has 6 structure points.  Once all 6 structure points have been burnt then the tent collapses into a fiery inferno.  Any model/base within 2” of a burning tent take a toughness test (S4), if failed they have caught fire and die writhing in agony, any other result leaves them unharmed for that turn.

Any number of Snotling bases not in hand-to-hand can be allocated to fight fires.  Remember this is done before determining how many can be used to build the wagon.  Each Snotling base allocated to fighting the fire rolls a D6 and consults the results below:
1-2 The fire burns more fiercely causing and additional D3 damage points.
3-4 The fire is put out completely.
5-6 The Snotling player may chose either to fan the flames or extinguish the fire.

If the tent which is burnt down contains the PumpWagon then the game is over for the Snotlings and they surrender, most likely to the cooking pot for their insurrection.

Special Rule
Snotlings are unbreakable in this scenario and do not need to test for any morale triggers.  There are so many of them in the camp running about and carrying on that any loss of morale would not even be noted!


To Kill a King Foreman

Wizza Knowot could not believe his pointy ears.  Leetle Jeem his Snotling lackey had just informed him that Foreman of the Snotlings intended to make a dash for freedom riding one of the new fangled Pump Wagons.
While the unruliness of Snotlings was to be expected, this insurrection and potential theft of war material was just not on.  He was torn between needing to keep an eye on Grog Tooftayka and his latest quest or come back and find a ruined camp, bereft of military potential.  He choose the lesser of two evils, at least Grog could fight his way out of trouble, where the Snotlings could do more malicious trouble than a dozen Grogs put together!

“Right you lot, about face, wez got ta head back and bash sum skulls.”

The Goblin Relief Force is made up of the following:

Thanks to the intelligence (or snitching) of Leetle Jeem, Wizza knows that he doesn’t have a lot of time to stop the Snotlings from escaping.  He knows that one of the three tents in the camp contains the Pump Wagon under construction.  He has issued fire arrows to his Stikkas with the hope that he can burn the machine before it is able to escape.

In this scenario the Gobbo player can break his Stickas and Gobbos into 5 “man” units.  Normal rules apply for morale AND animosity is still to be rolled for, so be careful!  Wizza is the army general in this case.

Deployment
The goblins deploy opposite the Snotling camp.  However not all the Gobbos have arrived in the same area?

Fire Arrows
A unit preparing to shoot fire arrows must spend the entire turn stationary.  Range is reduced by half.  Short Bows have a range of 16”, so 8” is now the range if fire arrows are used.  Remember ranges over 4” suffer a -1 to hit.

Setting Tents on Fire
To start a tent burning, consult the number of flame arrows that hit the tent during the Shooting phase.  This is the target number that you must roll under to start a fire on 2D6.  If 8 fire arrows hit a tent then a roll of 8 or less indicates a fire has started.  The tent has now suffered 1 structural point of damage, suffering 6 points destroys the tent.  Each tent has 6 structure points.  Once all 6 structure points have been burnt then the tent collapses into a fiery inferno.  Any model/base within 2” of a burning tent take a toughness test (S4), if failed they have caught fire and die writhing in agony, any other result leaves them unharmed for that turn.

Once a tent is burning it will remain so for the rest of the game, regardless of how many turns are played.

Posted by John McDonnell at 11:53 AM No comments:

So here are the painted Orks.  I was wondering why I had so little painted, then I remembered that there is about ten times this unpainted, including lots of Gargants and Mega Gargants.  I really must paint some more Orks, after all you can never have enough.

I have always had a passion for EPIC, it is the right size to play the massive battles that the 40K universe is all about, not this Apocalypse nonsense (though I don't hold it against those who enjoy it).

Below is just the painted models for my Space Marine/Imperials, modeled on my II Legion, I even have a "primarch" for them, though he seems to be missing in action at present. 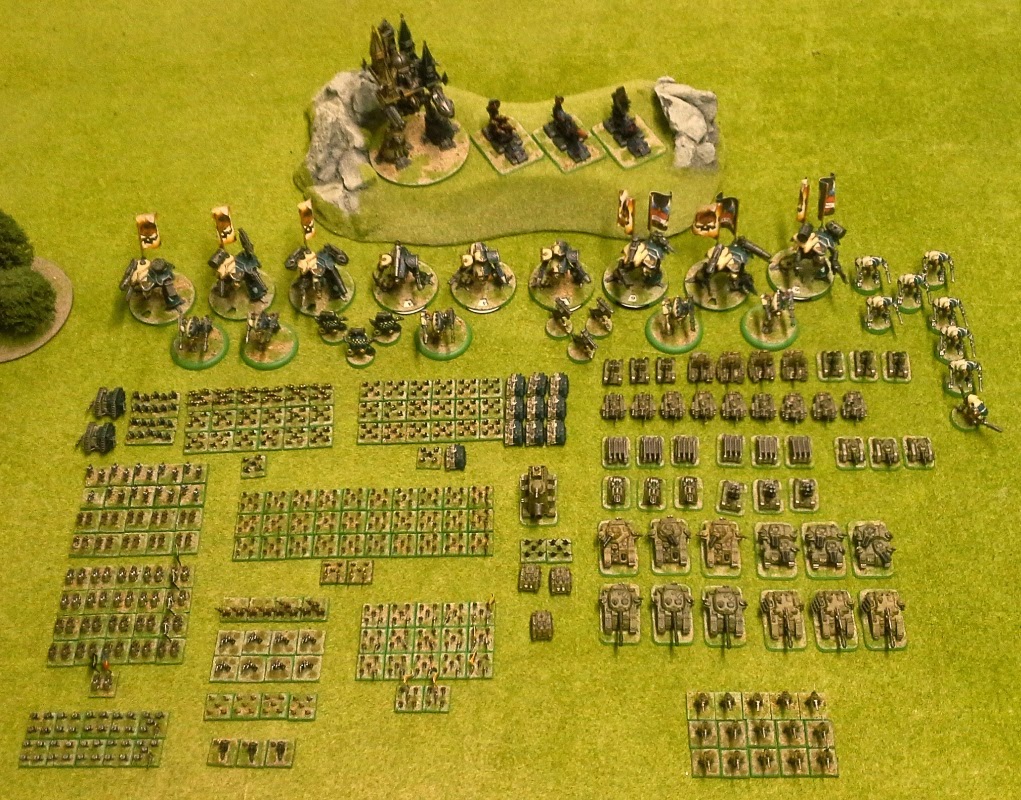 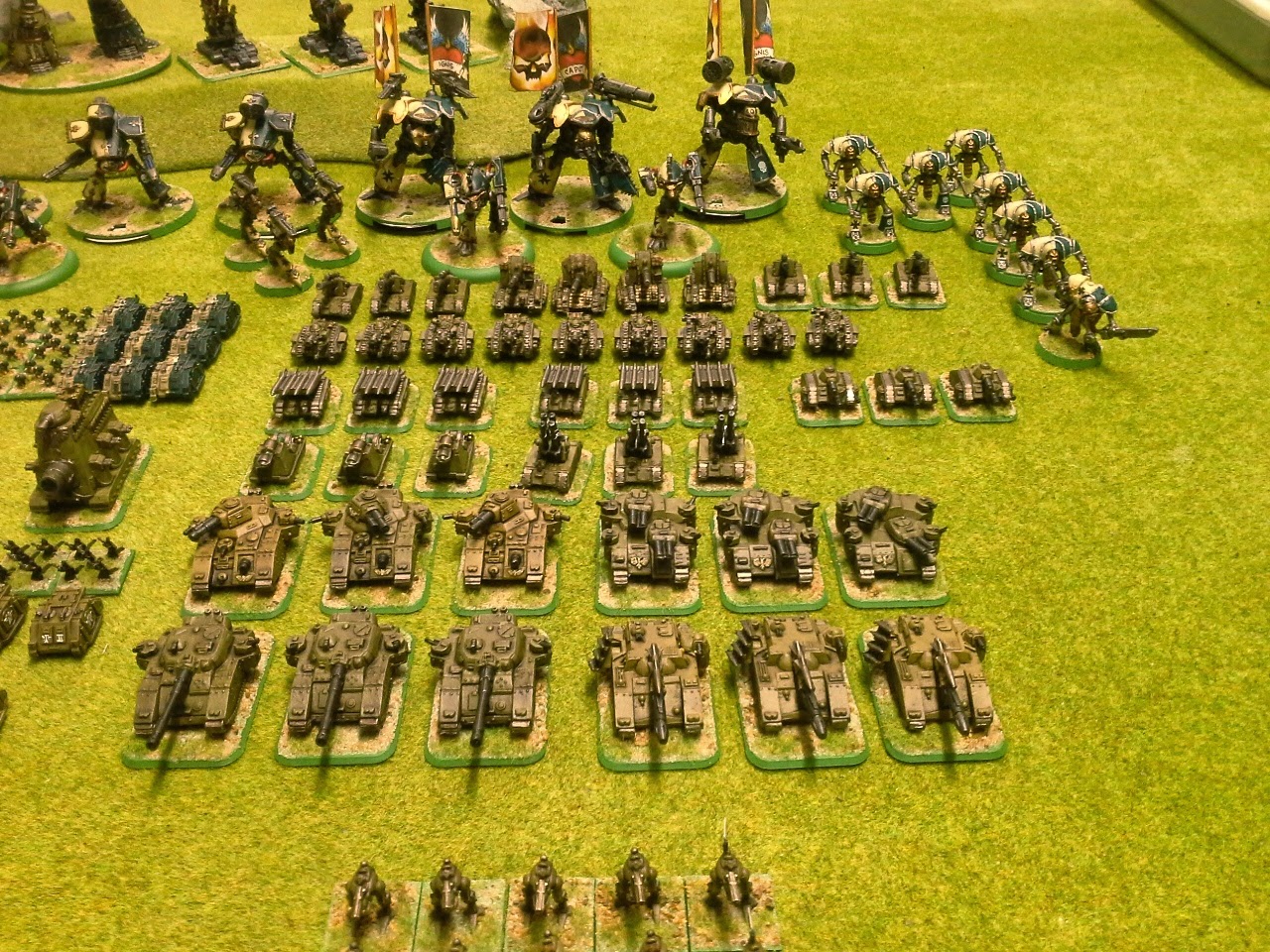 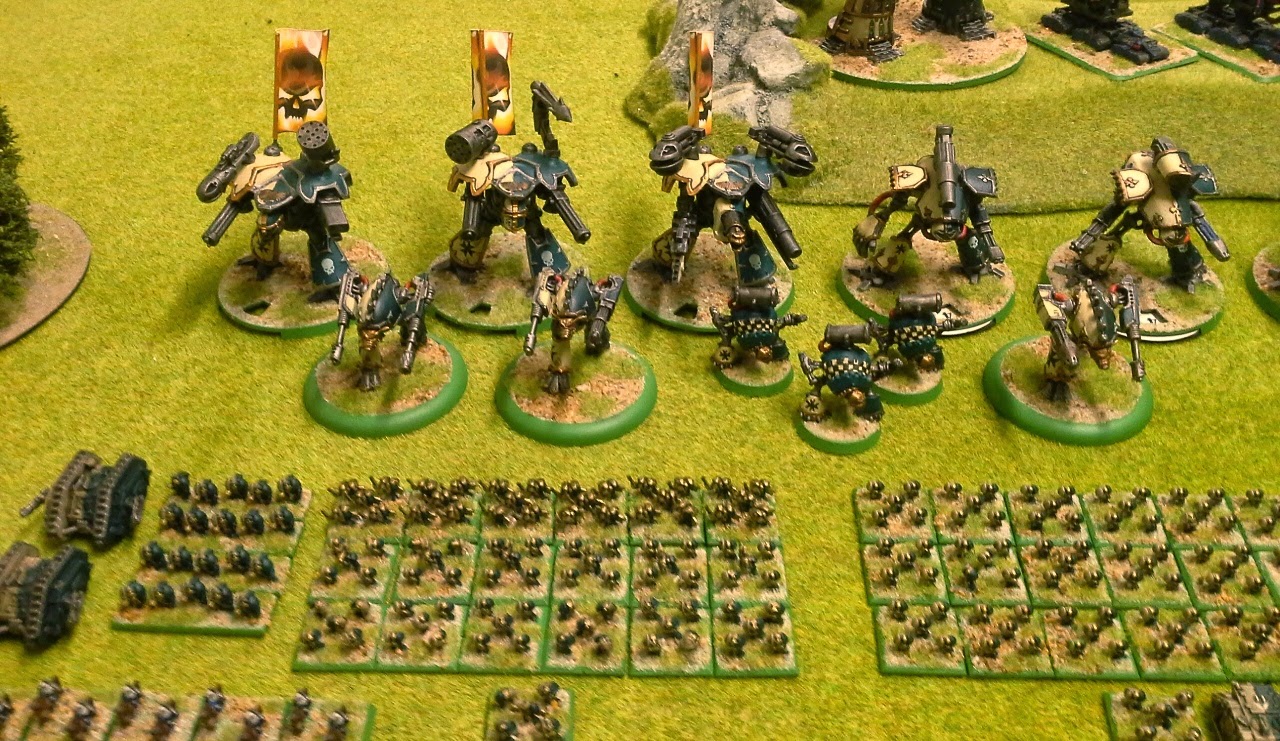 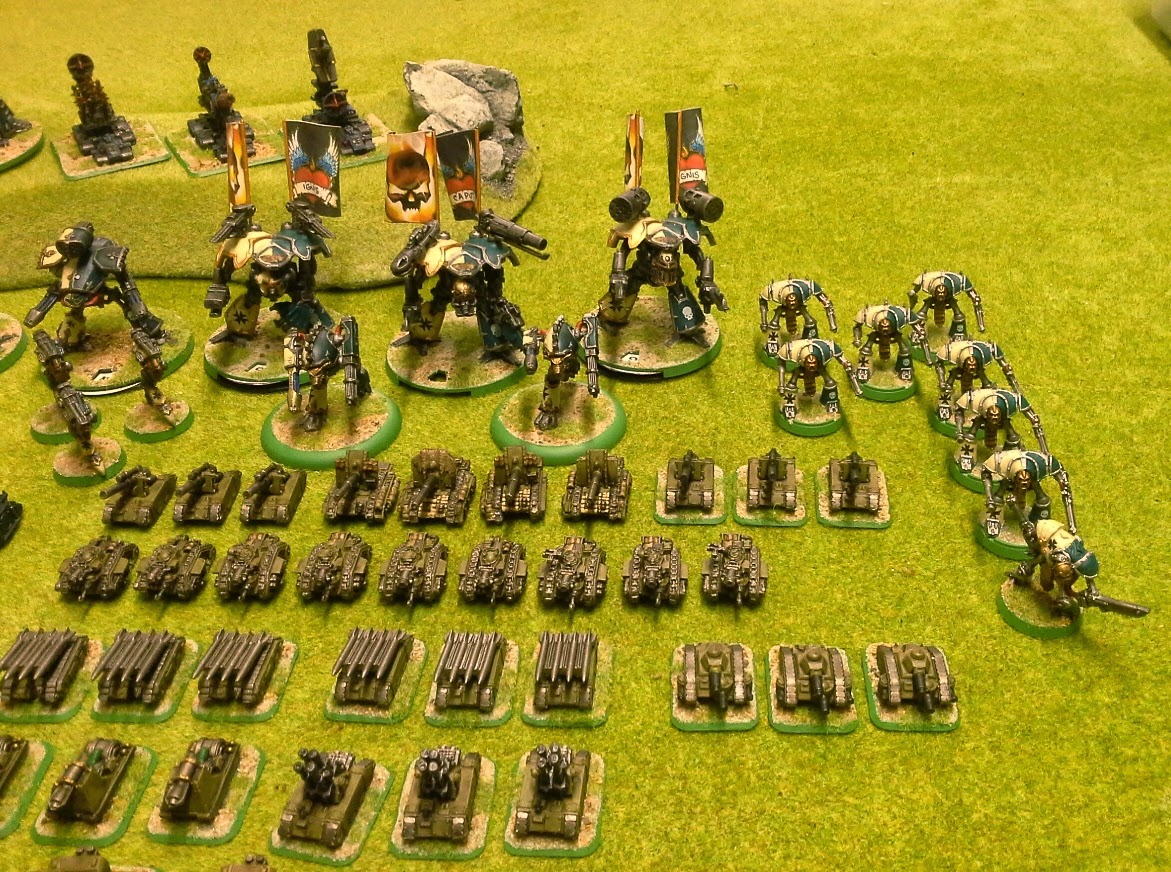 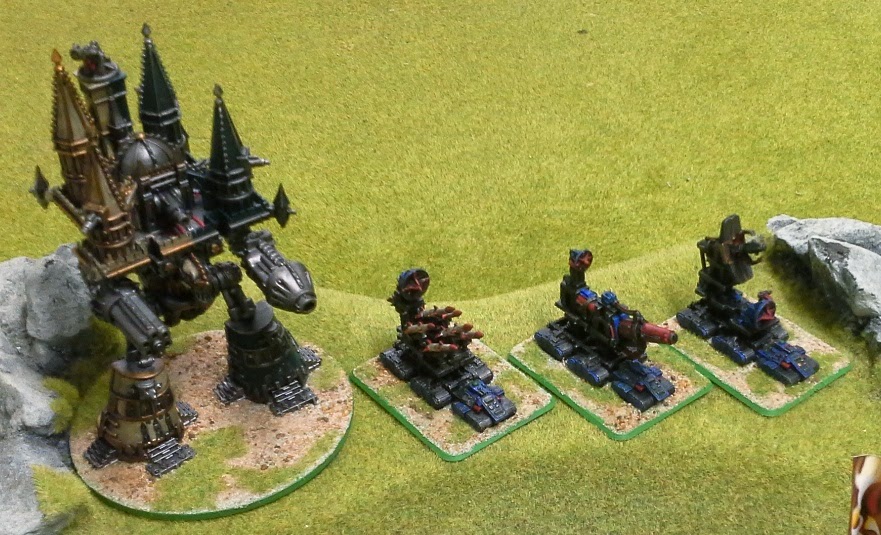 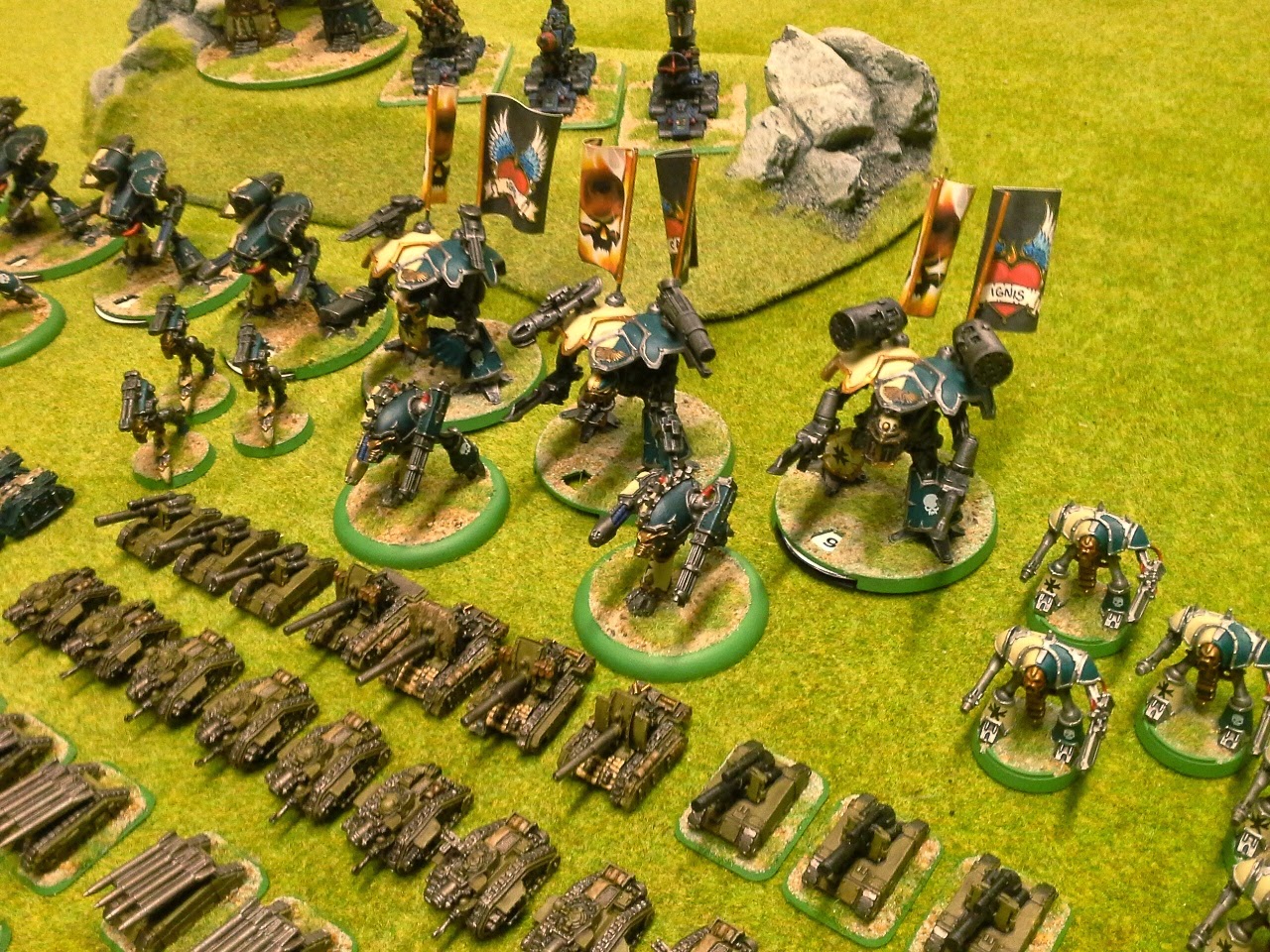 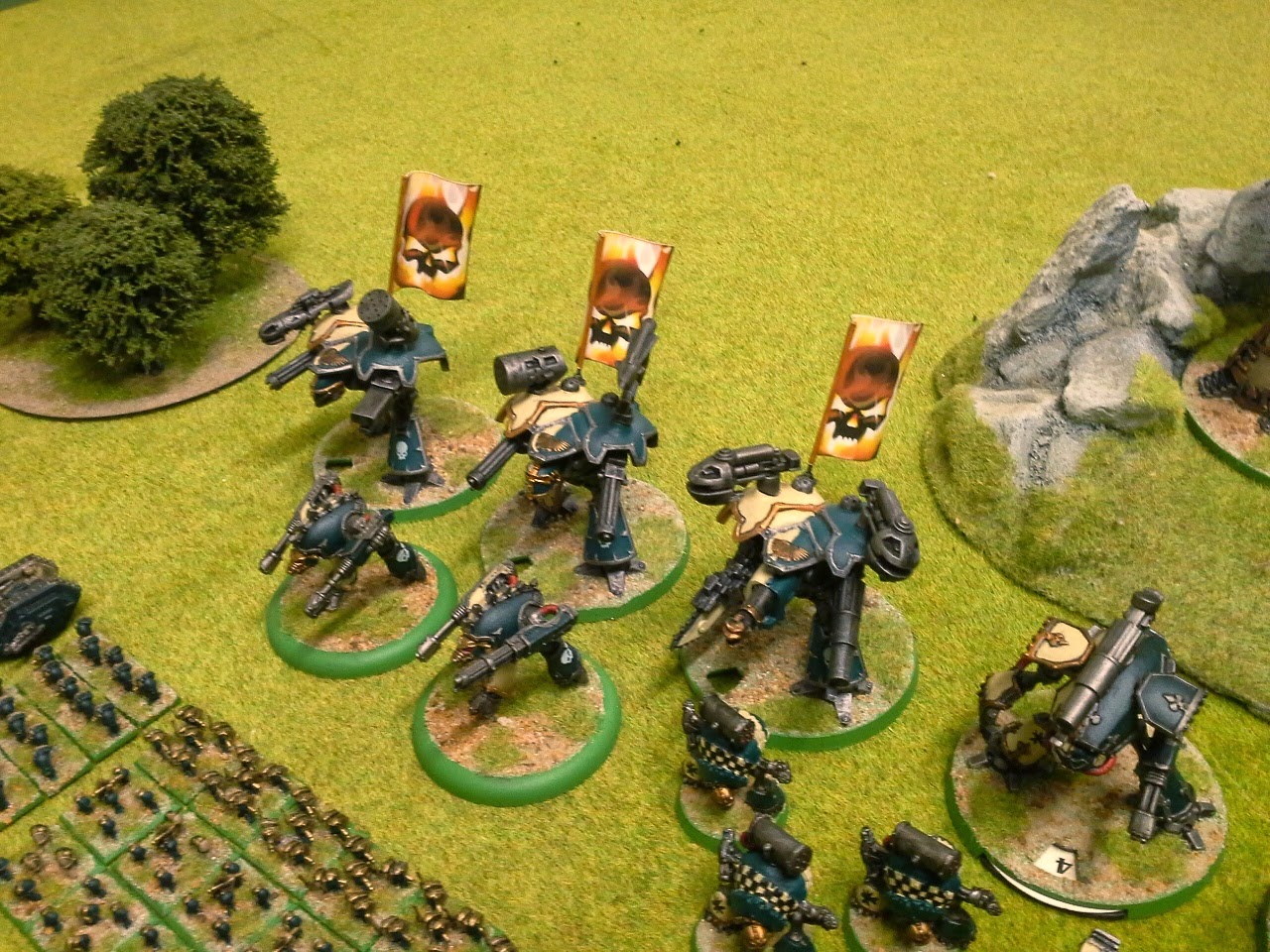