Part of searching for old projects, miniatures and books is you find some old gems that haven't seen the light of day in decades.  For instance I found my 2000AD collection and the Blakes 7 magazine.  I have the first issue 1977, that's 37 odd years ago.

So while waiting for Death to make an appearance I continue to chip away at that ice glacier I call my collection.

There are a number of projects on the table.  I find that if I can trick myself into believing that many little jobs make a mole hill then badger away I say.

I need just 2 Chaos Warriors from the Heroquest set to complete the box.

Here's what been done.


Noticed something interesting.  If I only post on my blog I only get a small amount of traffic.  If I link my blog to a facebook interest site, then my viewing traffic increases dramatically.  Clearly my blog as an engine of inspiration (to who, well I guess just me) is limited.
Posted by John McDonnell at 11:02 AM 1 comment:

An interesting game tonight, very much the battle decided by the terrain and Andrew's flank mark arriving.

I was expecting his flank march to arrive on my side of the board, so I chose an extremely defensive artillery right angle formation.  All it did was leave one battery of artillery flapping in the breeze.  I had to leave the limbers and horses behind so that I could squeeze my army into the available space.

In the end I conceded as I failed to carry the charge into the artillery battery, and the french were is a better position to carry the battle than I.  Good game though. 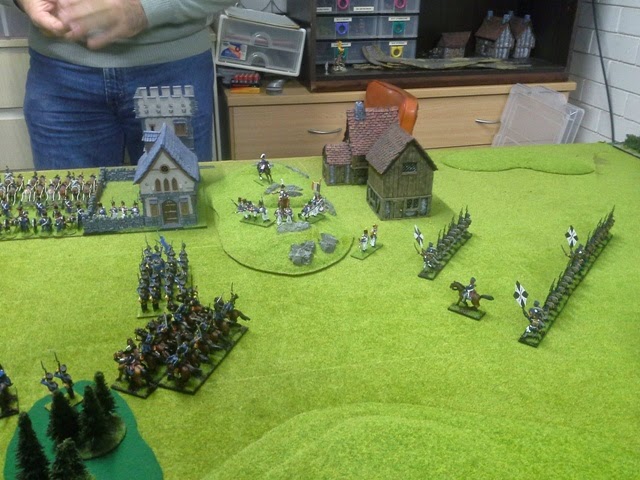 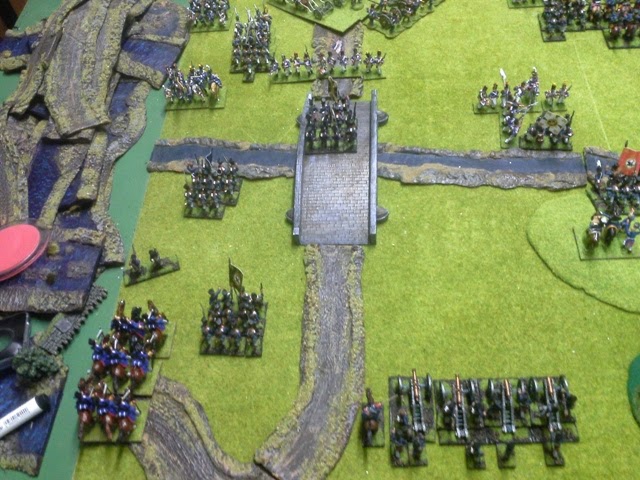 Posted by John McDonnell at 11:00 PM No comments:

Thanks to Glen T I have found something to stir me on to doing something, rather than sit here and despair.

The Story of Johanus Mageson Aspiring Champion of Tzeentch


Johanus Mageson was sitting in the Spawns Dangly Bits, an inn of dubious temporal stability, located somewhere in the Chaos Wastes.  At his table were the aspiring champions that had graduated from the Chaos School of Potential Spawn (CSPS), Albrecht Dogface (Khorne), Perival the Pretentious (Slaanesh), and Vile the Vexatious (Nurgle).  It was just his luck to be stuck between a frothing loony and a loony that couldn’t keep his hands to himself.  Then he had to spend what little sanity he had left looking across the table at Vile and his unsettling behaviour of popping his pustules into his drink.  Honestly, weren’t there any civilised champions of chaos here at all?

Johanus stared across at Vile, the bastard had topped his marks at CSPS, or cesspit as it was better known by those who attended.  Half a bloody mark, that was what was all that was in it.  Johanus had questioned the result, but due to the bilious nature of VIles excretions upon his grade papers, it was not possible to verify the results.  So Johanus brooded, drinking his Warp Ale in simmering anger, all the while Vile accepted the accolades from his fellow aspiring champions.  Johnaus seethed in jealousy and hatred.  He could almost understand why their two gods hated each other.

At the end of what passed for evening, Johanus left his table and made his way to leave the pub.  However his way  was blocked by the many armed bouncer.

“You hasn’t paid you tab mate, no leaving until the bill is paid.”

Johanus looked confused.  He’d paid for his drinks each time the waitress thing has brought another round of drinks.

“I paid for my drinks when I bought them, I owe nothing.”

“Ah but that Vile said you were paying for everyone’s drinks for the night.  They were on the house, so to speak. “

Johanus looked around for Vile, but the vile creature had made good his escape while Johanus was engaged with the bouncer.

Johanus looked up towards the roof of the tavern and swore to his god “That thieving Vile will pay for this ignominy, I curse him and will pursue him to the ends of the earth to get my money back!”

Having shouted that, he then started to count out the coins to pay the rather large and unpleasant bar bill.

Thus was the saga of tit for tat spats between Tzeench and Nurgles champions in the Chaos Wastes.  No one deserves to shaft another over a bar bill.


Right then - I always like to have a back story.  What better rivalry than a bar bill!  I have had a look at the Path to Glory rules, made some amendments (allowing greater troops choice) and will be running with it from here.

Pictures to follow in due course.  Painting them up as I type (so to speak).
Posted by John McDonnell at 5:56 PM No comments:

I may be trailing for completing my Heroquest board games, but I can at least say that I can complete my Space Crusade board game.  I have painted the lads shown below, only the Space Marines, Chaos Space Marines and Dreadnought to go to complete the game.

Many thanks to Aaron T for his assistance in completing my set.  Your generosity is much appreciated.

I have been attempting to complete my board game sets of Heroquest, Advanced Heroquest and Warhammer Quest for a little while now.

I've been searching my lair and the horde within trying to find unassociated projects, and stumbled across Heroquest.  Found that my logic trail with storing my figures defies human logic, which is just as well, I'm not human.

Here are some heroes I decided to work on to get the ball rolling.  I'm still trying to find the enthusiasm to paint large numbers of figures.

Posted by John McDonnell at 2:21 PM No comments:

Right so drinking Pear Cider (I only did so to see if it was any different or better than cider - jury gives a verdict of - no difference, certainly after the 12th can), and playing games can be a hazard.  Certainly I managed to damage a bridge and break a storage box lid.  Not I was not standing on the table to break the bridge.  Clearly I should not navigate around my game room while under the influence.  Thankfully my opponent Andrew was not on duty so I didn't get arrested for D&D (this time).

Right on to the game.  Whether it was the alcohol or just the fact that the terrain was a little kinder to me I felt not as badly outmaneuvered by my opponent.  Certainly I felt that my position was better.  My artillery I have decided are better at counter-battery actions than that of killing troops.  One of Andrews batteries was reduced to half strength before they were chased from the field by Lancers.  The other battery was reduced by one gun.  That battery did manage to drive off the Hussars as they did their Light Brigade impersonation.  They were sadly badly mauled.  My right flank fluttered in the air, I think I would have been safer to have had the entire unit behind the wall and settle for attrition from light troops actions.

In the end Andrew and I called it a draw.  Neither of us was prepared to leave the realitve safety of our positions for the off chance of rolling out opponent.

I enjoyed tonight, and look forward to next week with anticipation,  I'm hopefully trading my Lord of the Rings for British and Hanoverian troops to my Prussians!  Rockets, did someone mention rockets!

Here are some photographs for the night.


Posted by John McDonnell at 10:39 PM No comments: